A catch basin also called a storm drain, is usually built along the curb in the gutter on the edge of the road, allowing water runoff. It is part of a sewer system.

Maintaining and cleaning a catch basin is important to stop storm sewer blockages. Catch basin cleaning reduces the number of contaminants going into the storm sewer, which could eventually discharge into local waterways. Clogged catch basins might also cause water to pool on streets and in open areas like parking lots. It is imperative that catch basins be occasionally cleaned to maintain their ability to ensnare residue and subsequently their ability to prevent flooding. 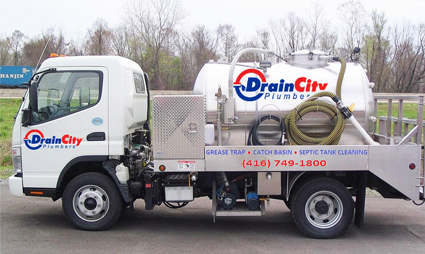 Catch basin cleaning can be difficult if the weather does not permit, for example, snow. At least once a year, preferably after fall, catch basins should be inspected to determine if they need to be cleaned. If it is noted during the annual inspection that the depth of the residue is equal to, or more than one-third the depth from the invert or the lowest pipe, or opening into the catch basin, it should be cleaned more frequently than once a year. Catch basins can be cleaned with specialized equipment, which includes a vacuum pump, or can be cleaned manually. Waste that is purged from the catch basin is disposed of in a standard landfill.

A catch basin in the yard also helps in private residences by controlling leaves, garden waste and garbage, restraining it from entering the drainage system, catch basins also help with removal of rain water. Having a catch basin on your property makes you responsible for cleaning it to remove that garden waste, garbage and especially in the fall the leaves, which could cause a major problem by plugging the drain and causing flooding if not removed. A qualified catch basin cleaning contractor can eliminate waste in your yard using catch basin cleaning, and the disposal of waste and debris.

Get Your Detailed Quote

All of our plumbing service appointments are scheduled at your convenience. We provide 24 Hour emergency plumbing and basement waterproofing service 7 days a week, even on holidays. Our thoroughly stocked service vehicles are radio dispatched – they will make it to your neighborhood in record time, and do any plumbing job required.

No matter what your plumbing needs may be, you can count on our knowledgeable Toronto plumbers. No job is too big or too small for DrainCity Plumbing. Free estimates are available for all plumbing repair and installation projects as well as commercial installations in Toronto. We have the experience needed to deliver the highest quality service throughout our plumbing service areas in Toronto and the GTA. Our master plumbers assist with plumbing services for both residential and commercial customers and can always respond quickly in an emergency.

Our Toronto plumbing company is pleased to offer you a full range of residential and commercial plumbing services such as:

This site uses cookies. By continuing to browse the site, you are agreeing to our use of cookies.

We may request cookies to be set on your device. We use cookies to let us know when you visit our websites, how you interact with us, to enrich your user experience, and to customize your relationship with our website.

Click on the different category headings to find out more. You can also change some of your preferences. Note that blocking some types of cookies may impact your experience on our websites and the services we are able to offer.

These cookies are strictly necessary to provide you with services available through our website and to use some of its features.

Because these cookies are strictly necessary to deliver the website, you cannot refuse them without impacting how our site functions. You can block or delete them by changing your browser settings and force blocking all cookies on this website.

These cookies collect information that is used either in aggregate form to help us understand how our website is being used or how effective our marketing campaigns are, or to help us customize our website and application for you in order to enhance your experience.

If you do not want that we track your visist to our site you can disable tracking in your browser here:

We also use different external services like Google Webfonts, Google Maps and external Video providers. Since these providers may collect personal data like your IP address we allow you to block them here. Please be aware that this might heavily reduce the functionality and appearance of our site. Changes will take effect once you reload the page.